Why is it so difficult for Gov. Doug Ducey to support dreamers? Everyone else does

Touting economic ties between Mexico and Arizona is great, but Ducey should also embrace immigrants in Arizona – many of whom are from Mexico.

Why is it so difficult for Gov. Doug Ducey to support dreamers? Everyone else does

Opinion: Touting economic ties between Mexico and Arizona is great, but Ducey should also embrace immigrants in Arizona – many of whom are from Mexico.

Gov. Doug Ducey doesn’t want any credit for ending his legal fight against letting Arizona "dreamers" get their driver licenses. And there may be a good reason for it.

Turns out the Republican governor didn’t really have a good case, since a federal judge had already sided with dreamers and the U.S. Supreme Court had declined to consider it.

But the Ducey administration refused to give up Brewer's fight against those protected from deportation, including victims of domestic violence. A federal judge again slapped Arizona down.

It is a victory, and I'll give Ducey credit

That bring us to this week. The Arizona Department of Transportation opted against appealing the latest federal ruling, and so DACA recipients are free to keep their drivers licenses, reported Howard Fischer of Capitol Media Services.

That means a sigh of relief for Arizonans because the roads are a little safer with licensed dreamers.

“It’s a victory,” said Karina Ruiz, who’s among the more than 28,000 dreamers living in the state and the director of the Arizona Dream Act Coalition. “We’ll take it.”

I’ll join that victory lap, and I’ll even give Ducey credit – if nothing else because he finally stopped wasting taxpayers’ money appealing a senseless crusade against young immigrants.

If he likes Mexico, why not Mexicans?

FacebookTwitterGoogle+LinkedIn
DACA and dreamers: How we got here
Fullscreen

Opinion polls have long suggested that most Americans want to protect 'dreamers,' the young undocumented immigrants who have spent most of their lives in this country. But those protections have been slow to materialize. Consider the timeline: Photo by Tom Tingle/The Republic
Fullscreen

2001: The first Development, Relief and Education for Alien Minors (Dream) Act — the legislation that gave 'dreamers' their name — is introduced to offer a path to citizenship for immigrants who were brought here illegally as children. It fails, as do subsequent versions. Nick Oza/The Republic
Fullscreen

2010: The Dream Act of 2010gets closer than previous attempts to passing but dies in the Senate. It offers a path to citizenship if young immigrants complete two years of college or serve in the military and complete a background check, among other requirements. Nick Oza/The Republic
Fullscreen 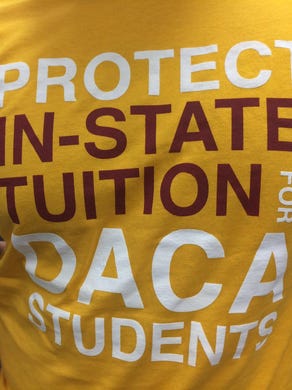 2016: Donald Trump promises to end DACA as a candidate but later softens his language on dreamers. AP
Fullscreen

2017: Trump issues an executive order to ramp up deportations after taking office. Some DACA recipients are deported. David Agren/Special for USA TODAY
Fullscreen

2017: Attorneys general threaten to sue if Trump does not rescind DACA. The president sets a 2018 expiration date for the program, despite pleas from some Republican lawmakers and business leaders to wait, and calls on Congress to pass a fix for dreamers. David Wallace/The Republic
Fullscreen 2017: A revised, bipartisan version of the Dream Act is introduced, but no action was taken before the end of the year. The bill offers permanent legal status to dreamers who enroll in college, join the military or find a job, among other requirements. Sam Greene
Fullscreen 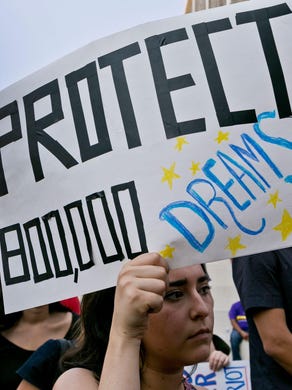 2018: A federal judge gives DACA recipients a temporary reprieve from Trump's decision to rescind the program. Congress and the president continue to discuss solutions, though funding for a border wall and threats over a government shutdown bog down talks. Photo by AP
Fullscreen

2019: President Trump is reportedly willing to offer dreamers permanent protections from deportation, along with money for border security, to resolve a government shutdown. Both sides have dug in over funding for Trump's border wall, and some say the offer to dreamers isn't enough. Photo by Carolyn Kaster, AP
Fullscreen

It really is a good thing to put this legal fight behind us. But why is Ducey so meticulously distancing himself from this decision?

His spokesman, Patrick Ptak, said ADOT “directed the litigation, including the decision to settle it.”

Let's get real. ADOT is a state agency that Ducey oversees, so nobody believes they’d take any action without the governor’s blessing.

“We've worked hard to make Arizona a welcoming place for all and will continue to do so,’’ Ptak added without answering direct questions about Ducey's stance on years of litigation.

That kind of elusive rhetoric is discouraging because I had hoped that the governor who touts Mexico as a key economic trading partner and boasts about his friendship with politicians south of the border would now openly embrace immigrants in Arizona – many of whom are from Mexico.

But, sadly, that doesn’t appear to be the case, even now that he is serving his second term and doesn’t have to face the conservative electorate that put him in office in the first place.

Will Ducey at least support this?

Ducey really is an enigma. He’s publicly polite and gracious to immigrants, carefully choosing his words. By many accounts he has put the brakes on anti-immigrant bills since the dark days of Brewer’s era. And he goes all-out luring Mexican business to Arizona.

Yet, he fights the very immigrants that come from Mexico, exploits fears of a U.S.-Mexico border invasion to get re-elected, praises the presidential pardon of former Sheriff Joe Arpaio and refuses to denounce president Donald Trump’s racial divisiveness.

Should Latinos and immigrants still give him the benefit of the doubt against this backdrop? Of course.

Ducey can and should have a change of heart. He can show it by supporting separate legislative efforts to let dreamers get in-state college tuition and rid of the remnants of the infamous Senate Bill 1070.