How does chain migration impact Phoenix? We can learn a lot from Filipino immigrants

The culture of the Philippines is family, and many have traversed oceans to rejoin siblings, parents and cousins.

How does chain migration impact Phoenix? We can learn a lot from Filipino immigrants

Opinion: The culture of the Philippines is family, and many have traversed oceans to rejoin siblings, parents and cousins. 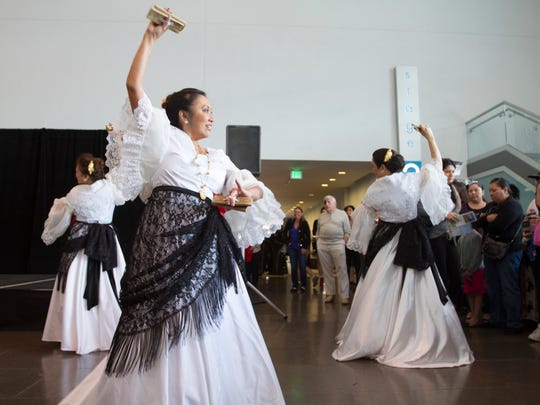 Call it family reunification or chain migration, but the issue is hot and political.

The visa system allows immigrants residing in the United States the legal chance to petition for their relatives to join them.

It's effortless to dehumanize the situation, looking only at the bureaucratic language and statistics.

But the messier reality is that an untold number of lives are directly affected by chain migration – like those of Arizona's fourth-largest immigrant population, the Filipinos.

Defined in one word, the culture of the Philippines is family. Drawn to their bloodlines, Filipinos will traverse oceans to rejoin siblings, parents, cousins.

In Phoenix, they've conquered those feats. And now, they thrive.

Luzario followed her faith to the desert

Fifteen years with the United Nations in New York City. Two mission trips to Bangladesh with the Asian Development Bank. Co-founder of a humanitarian non-profit, The 3000 Club.

But this accomplished 65-year-old Filipina is far from retirement. Now she's focused on the betterment of Phoenix – a place where she believed God had something in store for her.

Growing up in the Philippines' bustling capital, Luzario is no stranger to city life. She describes Manila as a congested metropolis with soaring high rises at its heart and widespread poverty in its suburbs.

Luzario not only perceived the foreign service members as friendly, but also protective of her home.

MORE: Why is Phoenix great? See it through Vietnamese immigrants' eyes

When she relocated to New York in her mid-twenties, the film industry had already painted a portrait in her mind of a nation flush with skyscrapers and opportunities.

She took a cross-country trip to visit her sister, who had already settled in the Southwest and implored her to stay.

Hesitant, Luzario declined, returning to the comfort of her career and the crowded streets of NYC. But soon, she noticed a longing in her heart for the desert.

And so she packed up for Arizona permanently.

Now a resident for more than 20 years, she appreciates the state's wide open spaces – so much so that she helps others cultivate their own homesteads as a real estate agent in Glendale.

On the other hand, 67-year-old Leonardo Aromin faced a more difficult transition, grappling with culture shock for years.

A lawyer in the Philippines, he accompanied his wife overseas to the United States. However, as he balanced graveyard shifts and paralegal classes, Aromin often considered moving back to the island nation.

Self-reflection eventually led him to embrace and even enjoy the change.

An Arizonan for almost three decades, he has long since found his niche.

"America is a land of opportunity that other countries cannot give," he said.

MORE: 5 things we can learn about Phoenix from Indian immigrants

When Aromin discovered the absence of a newspaper for the Filipino community, he launched the Phoenix-based Filipino American Journal – the only one of its kind in Arizona.

But Aromin never did develop a taste for American cuisine.

He chooses fresh vegetables over anything else – a preference rooted in his youth spent in a South Cotabato farming village.

He waited for a Filipino restaurant to one day crop up in the Valley and says that, at present, there are five.

Filipinos are historically tied to Arizona

Luzario serves as the chair for the Council of Filipino Organizations of Arizona, which consists of 16 community associations.

These organizations are indispensable in catering to the city's growing Filipino population and its needs.

Filipino immigrants arrived in Arizona almost a century ago as migrant farmers in the 1920s.

A more recent mass recruitment of teachers and health professionals has drawn Filipinos here, Luzario explained. They make up a significant portion of the assisted living industry.

As a result, the community stretches across Arizona. But she says many have settled in Glendale, Peoria, Globe and the east Valley.

Luzario highlights the spirit of "Filipino closeness" permeating the community in Phoenix, transforming it into a support system.

A shared objective between the Filipinos is to encourage younger generations to practice traditions and perpetuate them.

For Luzario, such customs include caring for aging relatives and spending holidays with family.

Then there's smaller but significant practices, like the mano gesture: a sign of respect expressed when one presses his or her forehead to an elder's outstretched hand.

Phoenix will continue to be a home to Filipinos

Phoenix has its flaws. To Luzario and Aromin, the metropolitan area lacks the high rises of the coasts and their cosmopolitan charms.

But it offers a chance at living each day at a slower pace.

"Phoenix is a wonderful place," Aromin said. "Life is better there."

He acknowledges the political leaders try their hardest. And his dream is to see Filipinos among them, making their voices heard.

Maybe that's what the future holds for the Valley.