Chris Simcox is found guilty of two counts of child molestation and one count of furnishing obscene material to a minor.

Chris Simcox gained notoriety as a founder of an Arizona border militia but he now faces child-molestation charges in which he wants to take the unorthodox step of representing himself in trial and questioning his accusers in court. 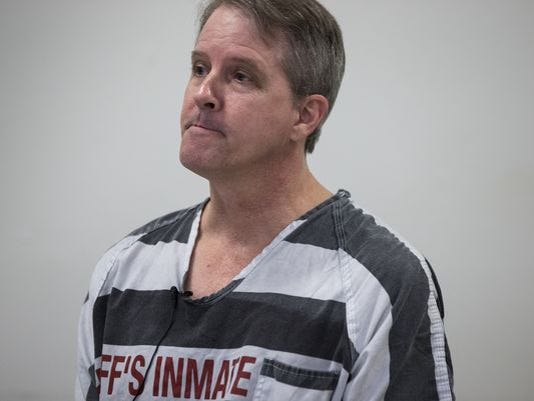 The three-woman, nine-man jury found him not guilty on three other counts of sexual conduct with a minor — a charge that carries a mandatory sentence of life in prison.

The jury had been debating the case since Monday afternoon.

Simcox faces a sentence of between 10 and 24 years in prison for each of the molestation convictions. A spokeswoman for the Maricopa County Attorney’s Office said the sentences could run concurrent to one another, but consecutive to any other count.

The jury’s verdict was essentially split by accuser. Simcox was convicted of all of the charges tied to the 5-year-old girl and none of those tied to the 6-year-old.

The mother of the then-5-year-old squeezed her face in her palm and dabbed her eyes with tissue after the verdict was read.

“He was convicted on at least one, and that’s all we need. This conviction is for all of the children that he hurt.”

Mother of one of the accusers

“I don’t have words,” she said shortly after the courtroom let out. “It’s over. I can go home and tell my daughter.”

She said in the end it wasn’t important to her whether Simcox was found guilty on all of the charges.

“He was convicted on at least one, and that’s all we need,” she said. “This conviction is for all of the children that he hurt.”

Simcox, wearing a black suit and blue dress shirt, was ushered out of the courtroom by a detention officer after the verdict was read. Though he had acted as his own attorney throughout the case, Simcox was not permitted to speak to the media inside the courtroom.

Kerrie Droban, Simcox’s advisory counsel, said she thought Simcox did a “valiant job” representing himself, and said she felt the jury gave him a fair shake.

The Arizona Republic has chosen not to identify the accusers in this case.

Chris Simcox (seen reflected in mirror) checks on one of his border-patrol stations in the Arizona desert between Douglas and Naco in April 2005. Michael Chow/The Republic
Fullscreen

Chris Simcox (seen reflected in mirror), one of the organizers of the Minuteman Project, checks on one of his civilian border-patrol stations in the Arizona desert between Douglas and Naco in April 2005. Michael Chow/The Republic
Fullscreen

Chris Simcox attends a 2005 Minuteman picket of a street corner in Phoenix that is used as a pickup spot by employers who hire day laborers. Many of the day laborers are undocumented immigrants. The Republic
Fullscreen

Chris Simcox (right) briefs Minuteman volunteers in Palominos before sending them to observation posts along the U.S.-Mexico border in April 2005. The Republic
Fullscreen

Chris Simcox, founder of the Minuteman Project, is flanked by members of the group at a Minuteman picket of a street corner in Phoenix in 2005. The Republic
Fullscreen

Chris Simcox talks to reporters at a Minuteman picket of a street corner in Phoenix in 2005. The Republic
Fullscreen

Chris Simcox testifies during a legislative hearing on a proposed domestic-terrorism bill in 2007. The Republic
Fullscreen

Chris Simcox, 55, was arrested in 2013 after two girls, ages 5 and 6, accused him of touching them inappropriately. He later was charged with two counts of molestation, three counts of sexual conduct with a minor and one count of furnishing obscene material to a minor. Mark Henle/The Republic
Fullscreen

Chris Simcox, a former kindergarten and grade-school teacher with no legal background, represented himself throughout the three-week case in Maricopa County Superior Court. He could face life in prison if convicted on one of the charges of molestation. Simcox answers questions during a jailhouse interview, June 10, 2015, in the Chapel at the Lower Buckeye Jail, 3250 W Lower Buckeye Road, Phoenix. Mark Henle / The Republic
Fullscreen

Prosecutors relied on witness testimony to make their case, and presented no physical evidence throughout the trial.

On the first day of the trial May 18, one of the girls — now 8 — testified about how Simcox touched her privates “like a cup” when she was at his apartment.

Two others not named as victims in the case also testified that Simcox had touched them inappropriately. Another young girl said the defendant had bribed her with candy to see her genitals, and a woman said Simcox had molested her as a child. Simcox had argued that he was the victim of a “perfect storm of circumstances,” and said each victim had motive to implicate him.

The case caught the attention of victims’ rights advocates last year, after Simcox announced that he planned to not only represent himself but to personally cross-examine his accusers in trial.

His intended strategy prompted various delays in the trial as prosecutors and victims’ attorneys attempted to fight it in higher courts. Simcox ultimately abandoned the plan earlier this year.

Simcox first gained notoriety in the mid-2000s as a polarizing figure within the debate on illegal immigration in Arizona. He co-founded the Minuteman Civil Defense Corps, a group that urged citizens to take it upon themselves to secure the U.S.’s southern border.

Ex-Minuteman testifies in his defense at Phoenix molestation trial