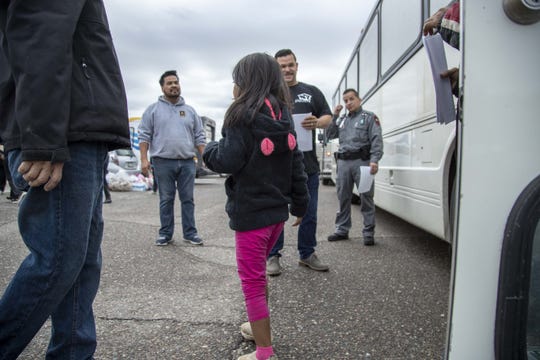 Federal immigration authorities have been releasing large groups of migrant families from Central America at local churches because they don't have the capacity to hold them. But two months after ICE began releasing the families, and with no end in sight, the churches are becoming overwhelmed. On Nov. 30, 2018, ICE released 60 families, totaling about 130 men, women and children, at Casa de Oracion Number 2, a Hispanic church in north Phoenix. The pastor greeted the families as they got off Department of Homeland Security buses, taking their first steps in the United States. (Foto: Nick Oza/The Republic)

The lawsuit accuses Patriot Movement AZ and an off-shoot group, AZ Patriots, of threatening, harassing and intimidating the churches, along with their pastors and their members, who were assisting undocumented migrants seeking asylum. It also accuses the groups of false accusations of human trafficking.

The suit alleged the two groups interfered with the humanitarian work of local churches that have been providing food, shelter and other assistance to migrant families released by federal immigration authorities. The lawsuit alleges that the groups' conduct amounts to a "conspiracy to violate" the civil rights of the churches, is racially motivated against Latinos, and amounts to defamation and trespass, he said.

The suit seeks an injunction against the defendants and monetary damages.

A proposed consent decree filed with the court Friday lists the four defendants agreeing to a settlement as Jeremy Bronaugh of Goodyear, Jennifer Harrison of Peoria, Eduardo Jaime of Phoenix, and Michael Pavlock of Peoria. In addition, AZ Patriots, which was founded by the four defendants, is listed as also agreeing to the decree. 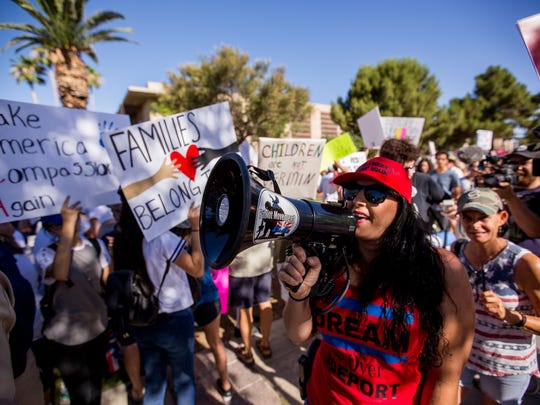 A member of the Patriot Movement Arizona yells "Trump is your president" through a megaphone on June 30, 2018, during the Families Belong Together rally outside of the Arizona Capitol in Phoenix. (Foto: Brian Munoz/The Republic)

According to the document, the four will be enjoined from in any way trespassing or obstructing people on any of the plaintiffs' properties or locations used by the plaintiffs, as well as physically touching or harassing anyone entering or leaving their facilities.

The decree also prevents the individuals from using loudspeakers or other amplified devices, vandalizing or taking videos or photos of people within 50 feet of any property.

In addition, the individuals agreed to identify any social media posts or publications where they accused the plaintiffs of engaging in any form of human trafficking.

The four defendants also agreed to pay $750 in damages.

The decree still must be approved by a judge. It does not settle the suit with the other defendants.

Security removes members of the Patriot Movement AZ from an Elizabeth Warren rally in Tempe on Aug. 1, 2019. The Republic | azcentral.com

Paying tribute to Arizonans lost to the pandemic

► PORTRAITS: The deceased leave behind friends, families and futures

► CONTACT US: Have you lost a loved one to COVID-19? Help us tell that person's story

PORTRAITS: The deceased leave behind friends, families and futures

CONTACT US: Have you lost a loved one to COVID-19?
PUBLICARTWEETLINKEDINCOMENTARIOSENVIARMÁS INFORMACIÓN
Read or Share this story: https://www.azcentral.com/story/news/local/phoenix-breaking/2019/09/06/az-patriots-founders-agree-stop-harassing-church-members-assisting-migrants/2239001001/