The ACLU of Arizona filed a civil-rights complaint against Glendale Union High School District, alleging it refused to enroll a Salvadoran refugee. 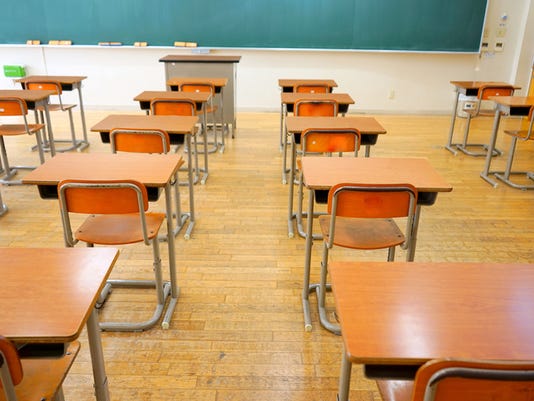 A complaint filed by the ACLU of Arizona alleges that Glendale Union High School District repeatedly refused to enroll a Salvadoran refugee.(Foto: maroke/iStockphoto)

The refugee — whose name was redacted in documents provided to The Arizona Republic — arrived in the U.S. in 2016 as an unaccompanied minor seeking asylum, according to the American Civil Liberties Union of Arizona.

He lives within GUHSD boundaries; is under the Arizona age limit for enrollment; and has "all appropriate enrollment documents including his proof of vaccine history, age, identity, and residency," the complaint says.

Yet when he tried to enroll at Cortez High School in December, the complaint says officials told him the school's practice was to "not admit immigrant or refugee students seventeen years or older who are not English proficient."

On another occasion, officials reportedly requested he submit to a psychological evaluation and declined to enroll him because he was unlikely to graduate before turning 21.

The complaint contends the "discriminatory and exclusionary" refusals violate the Civil Rights Act of 1964 and the Rehabilitation Act of 1973 and "demand immediate action by the Office for Civil Rights."

The Office for Civil Rights declined to discuss the complaint. A Glendale Union spokeswoman confirmed receipt of the complaint but said the district "does not comment on pending legal matters."

According to the ACLU, the prospective student had limited access to schooling in El Salvador and wanted to enroll at Cortez "to obtain an education, learn English, and make friends."

“For the last few years, we’ve heard people working with students in these situations say they just know: If you have an immigrant child who is 17 or older who has language problems, don't try to go to Glendale Union School District. It's a no-go. It's not hospitable.”

Darrell Hill, staff attorney for the ACLU of Arizona

In fact, the complaint argues GUHSD was "the best fit for (the refugee) because the school has more extensive special education services than public charter schools in his area."

When the teen first tried to enroll at Cortez with the help of a social worker, the school's assistant principal "refused to even accept (his) enrollment documents," the complaint says.

It says the assistant principal suggested the teen "attempt to enroll in an online high school or in a public charter school" instead, explaining that the school did not accept students his age who lacked English skills.

Title VI of the Civil Rights Act of 1964 forbids federally funded schools from discriminating based on race, color, or national origin in admissions, academic programs, and "student treatment and services."

The civil-rights complaint alleges the teen's case illustrates a larger pattern at GUHSD — one so widespread that "refugee resettlement organizations in the area routinely do not attempt to enroll students they serve" in Glendale Union schools.

"For the last few years, we’ve heard people working with students in these situations say they just know: If you have an immigrant child who is 17 or older who has language problems, don't try to go to Glendale Union School District," said Darrell Hill, staff attorney for the ACLU of Arizona. "It's a no-go. It's not hospitable."

RELATED:  Where do Arizona refugees come from?

Glendale Union isn't the only school district to face allegations of unfair treatment of refugee or immigrant students in recent years. The Associated Press and Georgetown Law Human Rights Institute have identified districts throughout the country they say unlawfully treated foreign-born students differently.

In some cases, school officials demanded foreign-born students provide documentation not required of native-born students or created other enrollment barriers. In others, districts diverted students to alternative programs or schools for kids with behavioral problems.

In 2016, a federal judge ruled that a Pennsylvania school district violated the civil rights of 17- to 21-year-old refugees who spoke limited English by sending them to an “inferior, privately operated alternative school.” The ACLU of Pennsylvania helped sue the district.

The Trump administration told Congress it wants to cap the number of refugees admitted to the U.S. at 45,000 during the next fiscal year. Video provided by Newsy

Glendale Union policy states that a student who is “a resident of the District and who meets the applicable age requirements established by state law" — 6 to 21 years old — "shall be admitted without payment of tuition to the school in the attendance area in which the student resides.”

It does not require prospective students to submit comprehensive medical records to enroll.

That makes district officials' alleged request that the teen submit results of a psychological evaluation a departure from district policy.

Requiring evaluation of a disability as a condition of enrollment also violates Section 504 of the Rehabilitation Act of 1973, according to the complaint.

Section 504 prohibits public school districts from excluding people with disabilities "in the provision of services, programs, or activities."

It requires them to "provide a 'free appropriate public education' to each qualified student with a disability who is in the school district's jurisdiction, regardless of the nature or severity of the disability," according to the federal Department of Education.

'Pretty plainly against the law'

The ACLU of Arizona asked the Office for Civil Rights to investigate Glendale Union immediately.

"It is vital that the Office for Civil Rights intervene before more students are subjected to discrimination that hinders their ability to receive an education," the complaint says.

The complaint also outlines a series of recommendations for the district, including:

Hill, the ACLU attorney, said the recommendations are "not out of the ordinary" and are "things that other school districts voluntarily do."

"If our understanding of what happened is true, it's pretty plainly against the law, and I’m sure whoever represents Glendale Union knows that," Hill said. "It's really a matter of getting those front-line staffers educated about the law and making sure that they're doing the right things."

Syrian sweets sales offer bakery owner a way to give back, Arizona refugees chance to thrive