18-month-old dies after being found inside vehicle in Glendale

An 18-month-old died in the parking lot of the Paseo Park Apartments in Glendale after being left in a car.

18-month-old dies after being found inside vehicle in Glendale 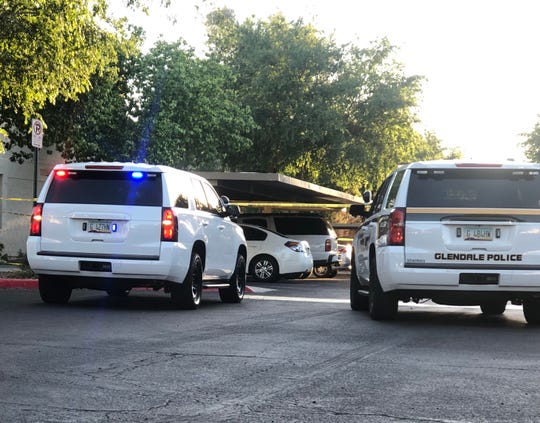 Glendale police were at an apartment complex, where a child died after being pulled from a car Monday. (Foto: Dani Coble)

An 18-month-old girl died after being left inside a car in Glendale on Monday afternoon, officials said.

The incident occurred about 4:30 p.m. in the parking lot of the Paseo Park Apartments, 5205 W. Thunderbird Road, Glendale police said.

The girl's father came out to the car and found the girl in the vehicle, said Officer Tiffany Ngalula, a Glendale police spokeswoman.

The father began performing CPR while awaiting paramedics, and multiple neighbors who saw him also called 911, she said.

The girl was pronounced dead at the scene by paramedics.

"The child had been left inside the vehicle for at least a few hours,'' Ngalula said, adding all of the car's windows were rolled up. She added it still was yet to be determined exactly how long the child was in the vehicle.

Both parents were being interviewed by detectives Monday evening, Ngalula said, adding that initial information indicated the child normally was at day care during the day.

She said the case would be investigated for any possible criminal violations.

"It's just a very difficult call, one of the most difficult we ever receive,'' she said.

Officer Tiffany Ngalula of the Glendale Police Department talks about the death of a child who was left in a vehicle Wednesday. The Republic | azcentral.com

When an outside air temperature is 86 degrees, the inside temperature of a vehicle can exceed 130 degrees, said Jan Null, a professor of meteorology at San Jose State University who has researched pediatric heatstroke in vehicles.

Null, in an email to The Arizona Republic, said the death, if shown to be heat-related, would be the third such case involving a child in the United States this year. Last year, 52 such deaths were recorded nationwide, she said.

Two of those 2018 cases occurred in Superior, where two children were found dead in a vehicle last May after being left there for several hours. The child's mother was arrested in connection with their deaths.

Ngalula said the incident was another tragic reminder of the need to remain attentive when small children or anyone else who cannot help themselves are in the backseat of a vehicle.

"The biggest takeaway, the most important message, is to check twice,'' she said. "Check twice for loved ones that are unable to let themselves out of a vehicle because ultimately, we are responsible for them."