Maná in Phoenix: 'A todos los gringos, we love you guys ... we are not racist'

Maná spent much of Friday's Talking Stick Resort Arena concert on the Rayando El Sol Tour singing songs of romance. We have a setlist and review.

Maná in Phoenix: 'A todos los gringos, we love you guys ... we are not racist' 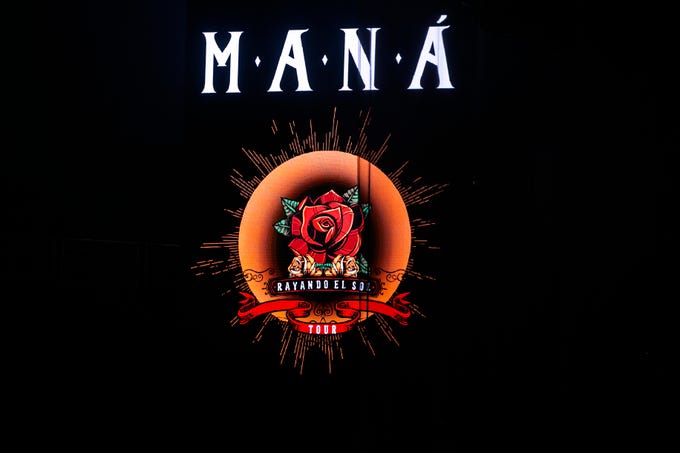 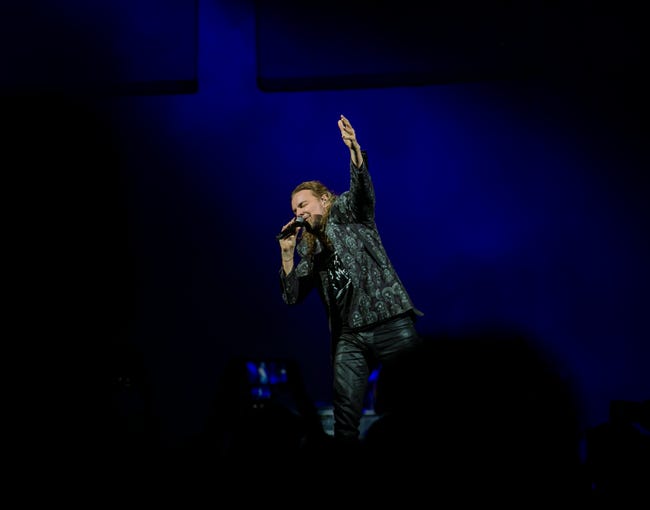 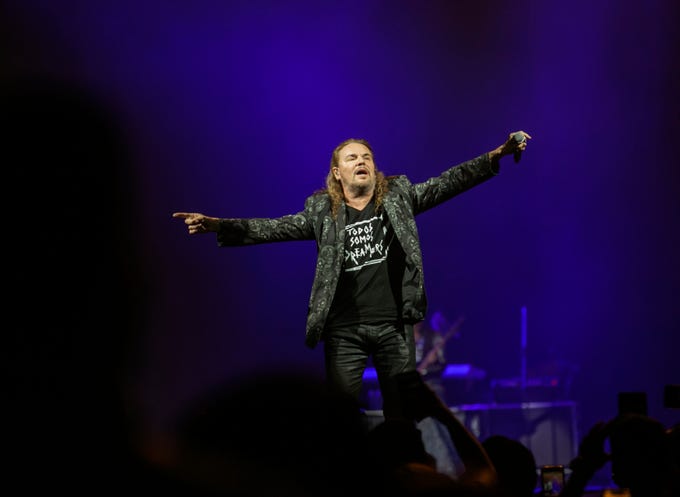 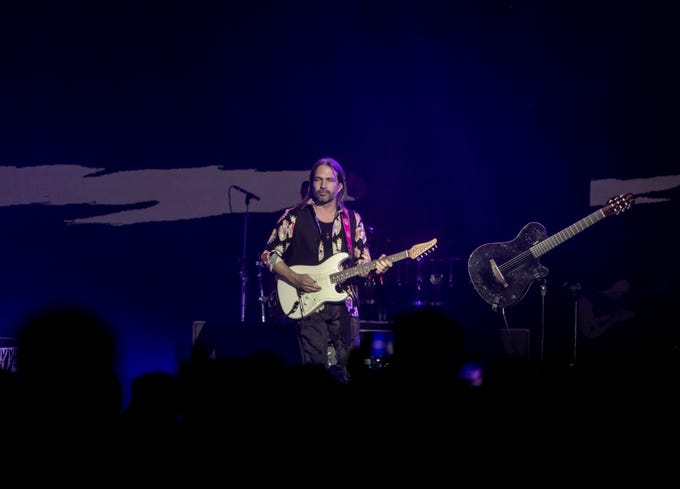 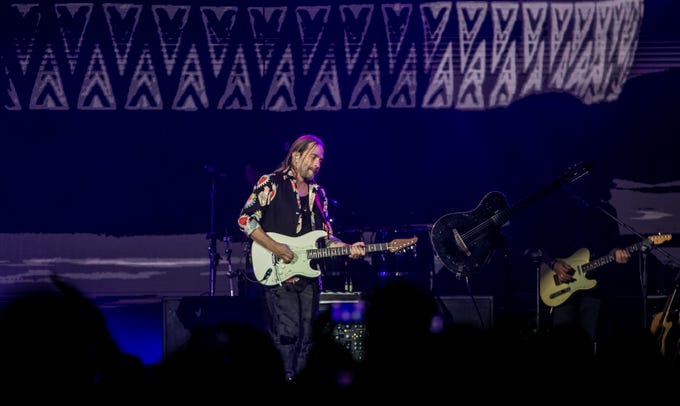 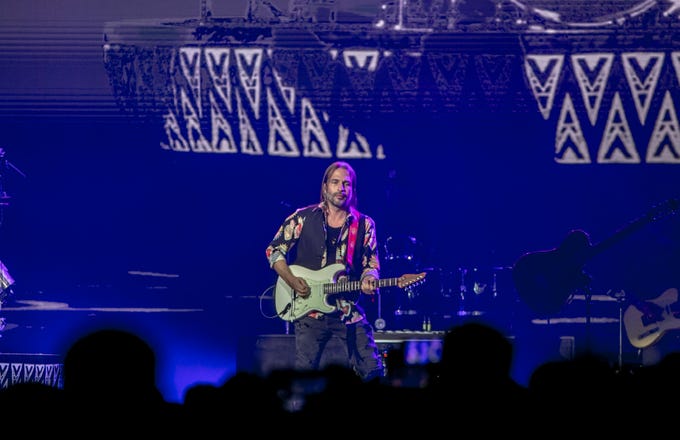 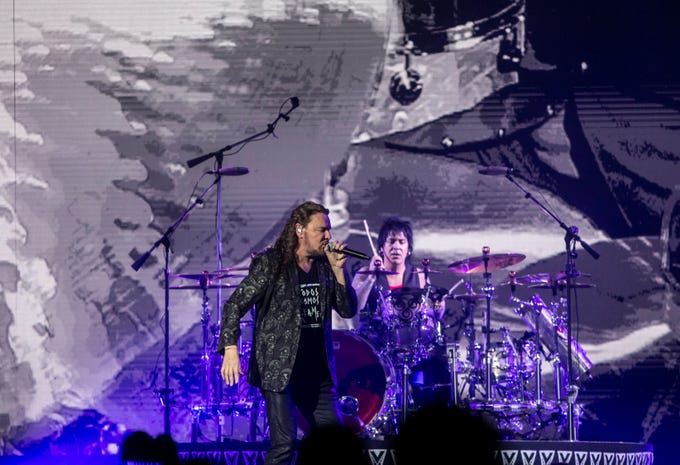 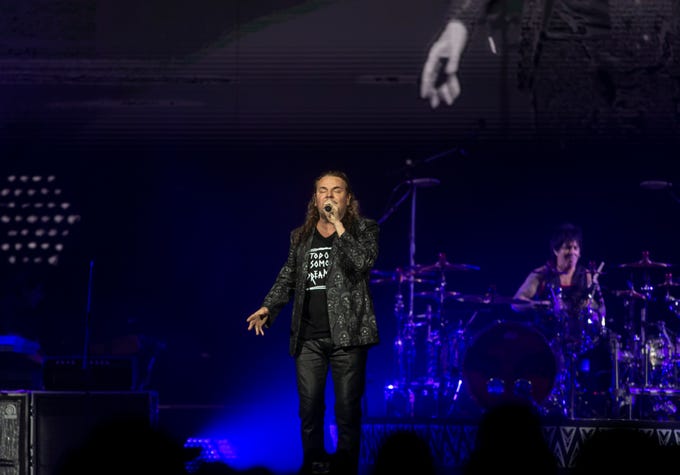 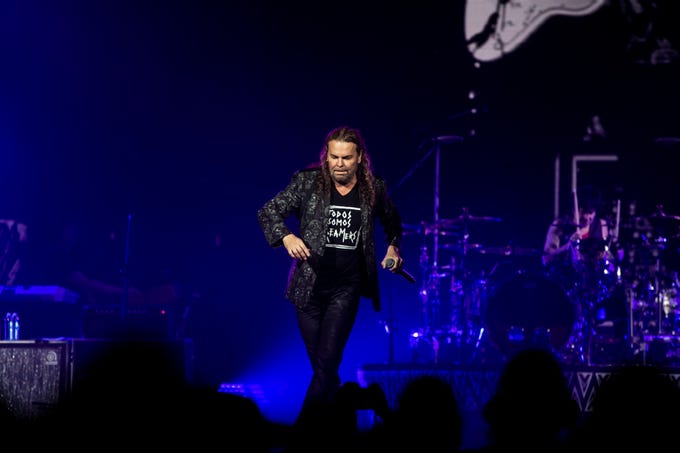 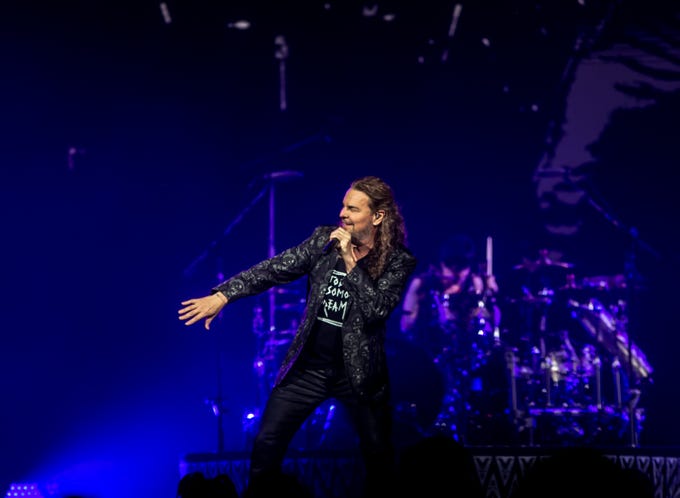 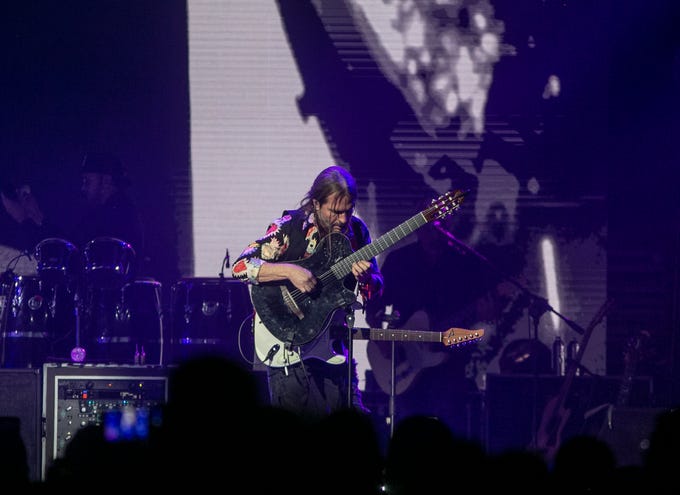 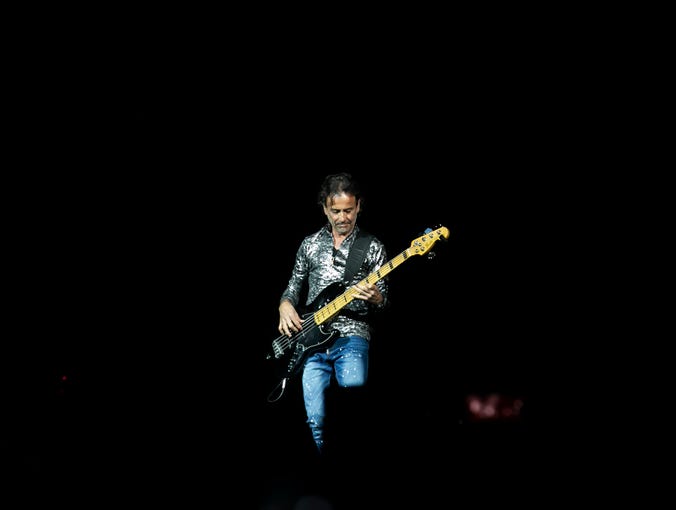 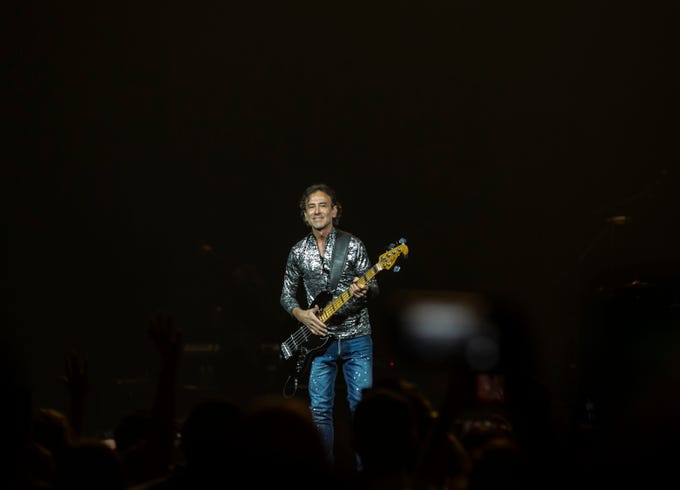 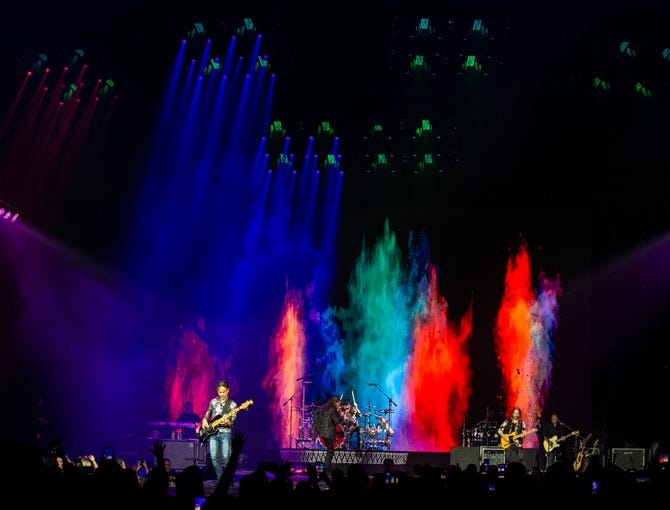 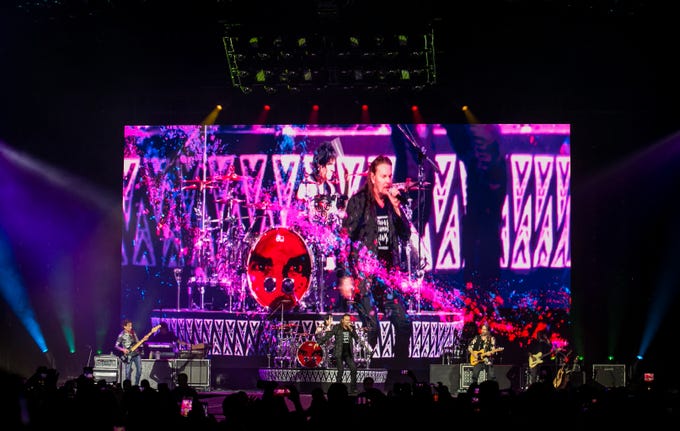 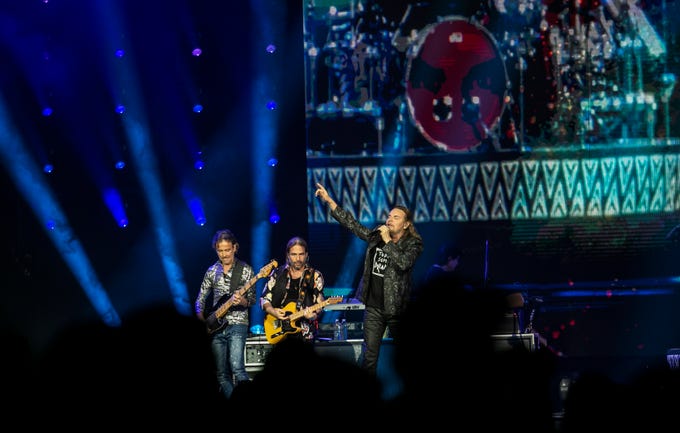 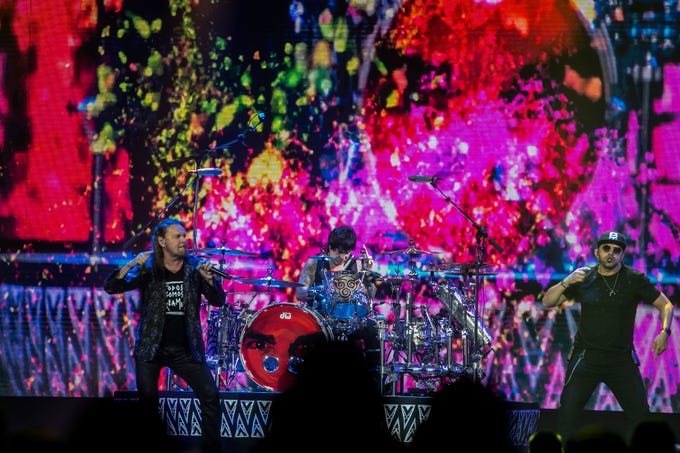 It's 1990. George H.W. Bush is president, the world is introduced to Macaulay Culkin as the bratty Kevin McCallister in "Home Alone" and the airwaves are filled with jams by Jon Bon Jovi, Bell Biv DeVoe, Wilson Phillips, Depeche Mode, Mariah Carey and yes ... Vanilla Ice.

South of the border, a little known Mexican band quietly releases a second album, "Falta Amor," with little fanfare. The record as a whole wouldn't go on to make any all-time lists but it does yield, "Rayando el Sol," a sentimental pop-rock ditty that goes on to earn critical acclaim that propels the group into the limelight.

Fast-forward a few decades, add a slew of Grammys, Billboard Awards and other world accolades and behold, one of the most successful, influential and adored Latin bands Maná.

After a three-year break from the road, the rock en Español darlings made the fifth stop of their Rayando El Sol Tour at Talking Stick Resort Arena Friday night and paid fan service to a packed and energized crowd.

With the tour being named after one of the group's first notable successes, fans didn't have to guess what was in store for them. The quartet comprised of singer Fher Olvera, drummer Alex González, guitarist Sergio Vallin and bassist Juan Calleros started the night with the bright and uplifting "Como Te Deseo," and "De Pies a Cabeza" off of the seminal 1992 masterpiece, "Dónde Jugarán Los Niños," and the slow-grooving, "Hechicera" off of 1997's "Sueños Liquidos," another standout Maná album and fan-favorite.

MORE THINGS TO DO: For restaurant reviews, travel tips, concert picks and more, subscribe to azcentral.com.

They played around with some of the pacing of their renowned mid-tempo songs and flexed often during their beloved ballads where Olvera's signature soaring vocals made fans swoon and sing along. González put the "rock" in rock en Español, with hard-hitting snare hits while taking lead on vocals as he belted out the words to the rollicking "Como Un Perro Enloquecido" and the middle-finger anthem, "Me Vale."

Maná's performance leaned on the power of their lyrics with their familiar and relatable storytelling prose wrapped in soothing vocals, calming guitar strums and propelling bass lines. On stage, Vallin and Calleros bounced around and made use of the ample floor space when appropriate while Olvera shimmied during their dancier tracks or dropped to a knee during more dramatic turns. To mix things up, they spread out the set along two other stages. A smaller one at the end of the catwalk situated in the middle of the arena and an additional one at the back of the arena floor.

In a night replete with a greatest hits list of songs, virtually every track was a fan favorite with notable highlights including the Police-esque "Oye Mi Amor," "Bendita Tu Luz" and "Te LLoré un Rio." Olvera spoke to the audience often, providing backstories to songs and engaging fans regularly.

One of the cooler set changes occurred mid-set when they made their way back to the main stage. The arena went pitch black while the first words to the planet-conscious "Dónde Jugarán Los Niños" rang out. When the stage lit up again, a gargantuan, blow-up elephant had emerged over González's drum kit and the members of Maná were all wearing animal masks. The life-like sway of the elephant was particularly gnarly and served as the perfect backdrop to the tune that begs, "Where will the children play?" 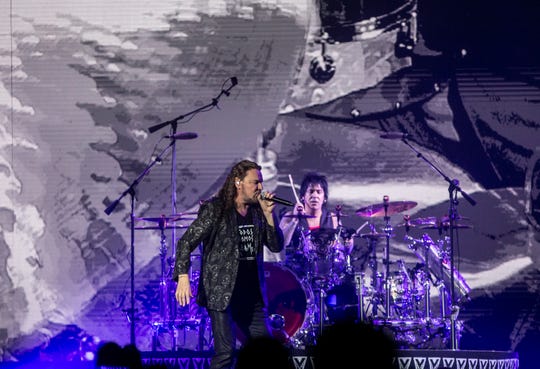 Of course, no Maná concert would be complete without a gratuitous six-and-a-half-minute drum solo by the venerated González, and a chica making her way to the stage for a serenade set to 2002's "Mariposa Traicionera." While love was the undeniable main theme of the majority of the set, they pulled on plenty of other heartstrings, coercing more than a few tears with the heart-wrenching "El Reloj Cucú." Olvera recounted his father's death when the singer was only 7 years old, and the cuckoo clock he spoke to as he tried to reconcile the loss.

Naturally, the evening ended after more than two hours with the song that arguably launched the legendary group's career "Rayando el Sol," and a strong message from Olvera. The hit single from 1990 landed while the world was embroiled in Iraq's invasion of Kuwait and what would become the Gulf War. This time around Olvera confronted a new conflict.

"We are not going to be intimidated by terrorists that attack Latinos," Olvera said in Spanish. "It was reprehensible what happened (the shooting) in El Paso, Texas. Also, it appears to me that this government doesn't care for us very much. But ultimately, there are a lot of us Latinos and Mexicans. This is a democracy - use your vote to remove the people that do not support your community."

The singer unfurled a white banner with a peace sign representing flags of the world before imparting a final word of gratitude to their legion of adoring fans.