The concert at Wild Horse Pass by Alejandra Guzmán, la reina del rock, was unpredictable and exciting. Here are the 5 best moments and a setlist. 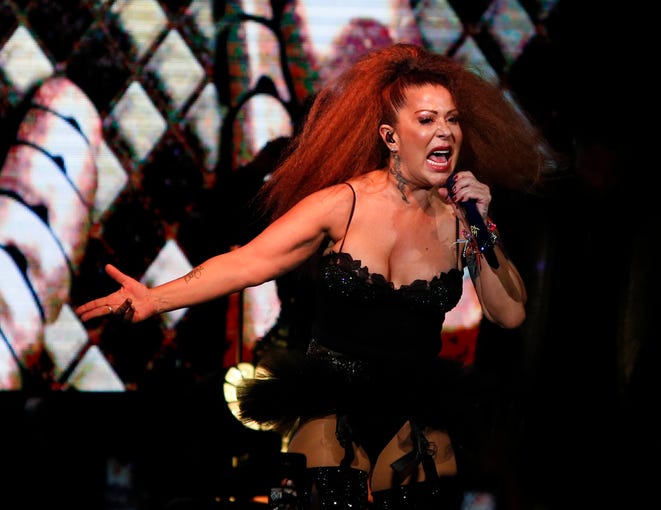 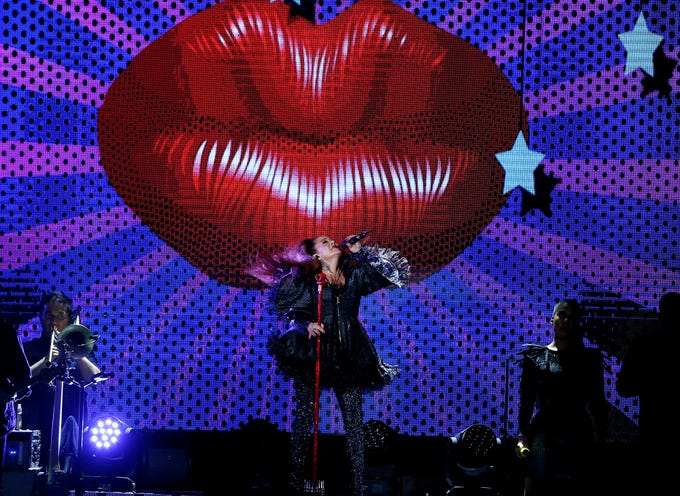 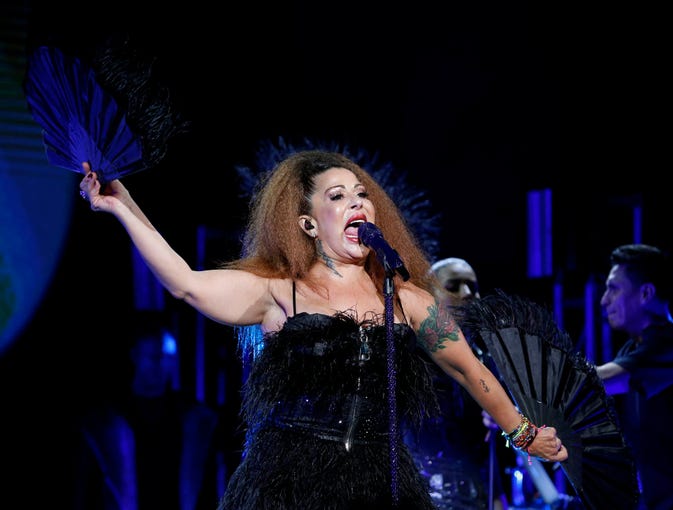 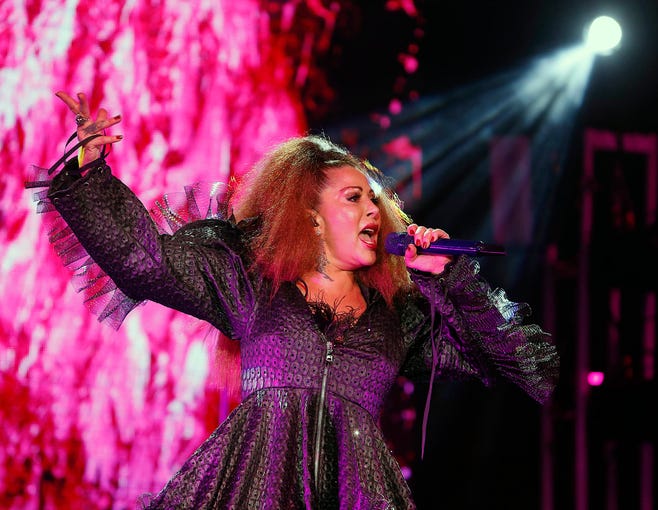 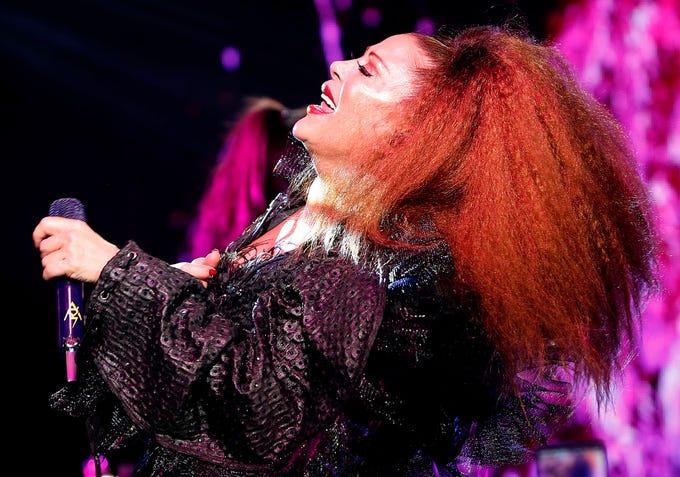 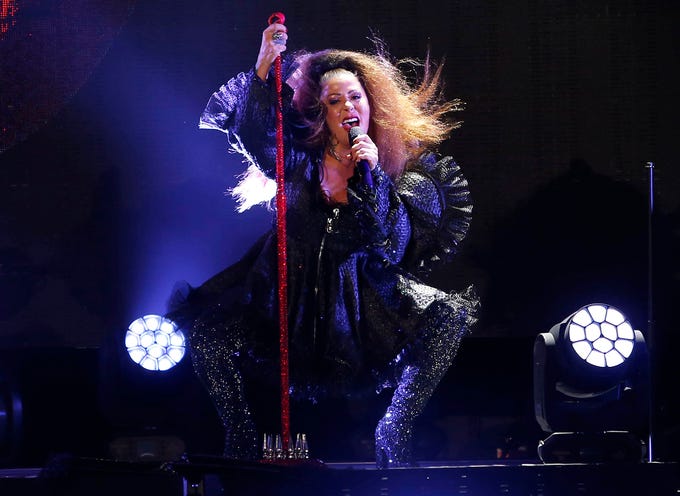 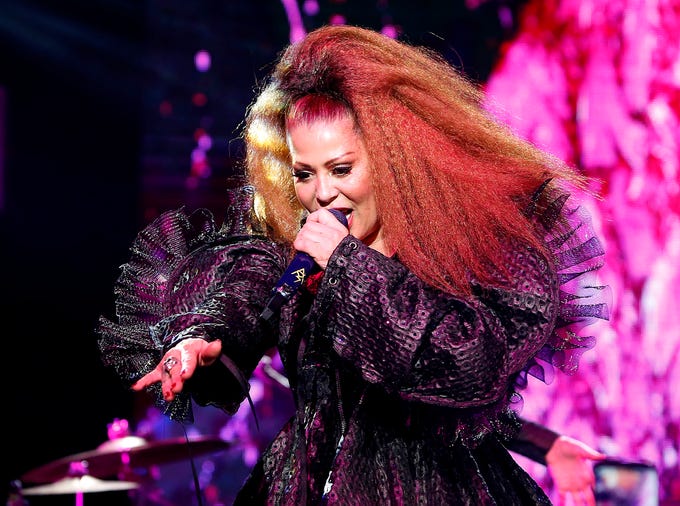 A fan cheers as Alejandra Guzmán performs at Wild Horse Pass Hotel and Casino in Chandler on Saturday, June 1, 2019. Ralph Freso/Special for The Republic

A fan cheers as Alejandra Guzmán performs at Wild Horse Pass Hotel and Casino in Chandler on Saturday, June 1, 2019. Ralph Freso/Special for The Republic 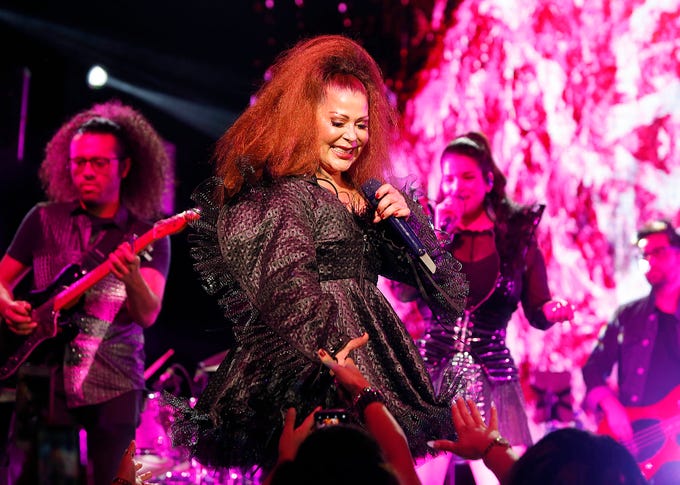 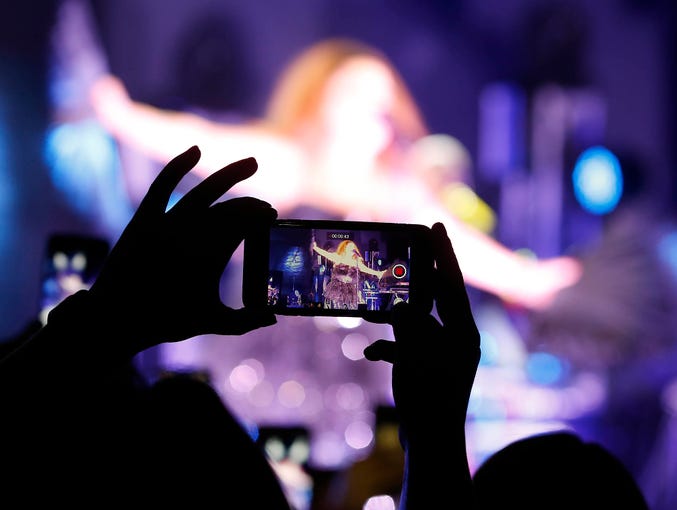 A fan records video on their cell phone as Alejandra Guzmán performs at Wild Horse Pass Hotel and Casino in Chandler on Saturday, June 1, 2019. Ralph Freso/Special for The Republic

A fan records video on their cell phone as Alejandra Guzmán performs at Wild Horse Pass Hotel and Casino in Chandler on Saturday, June 1, 2019. Ralph Freso/Special for The Republic 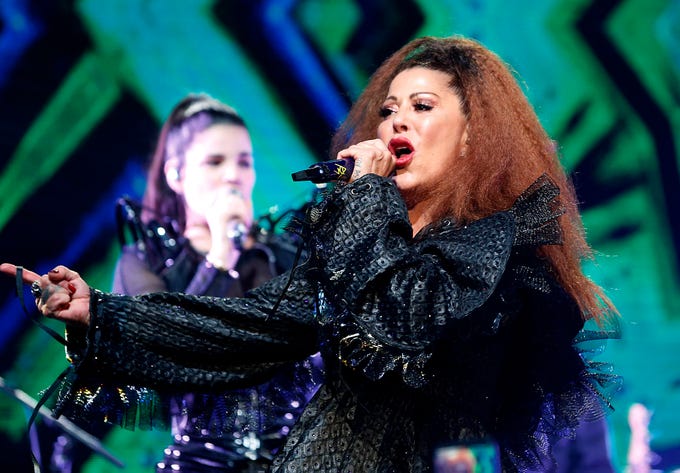 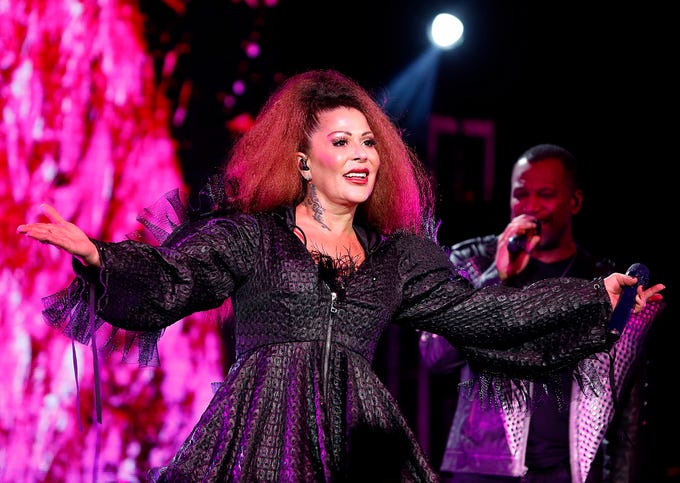 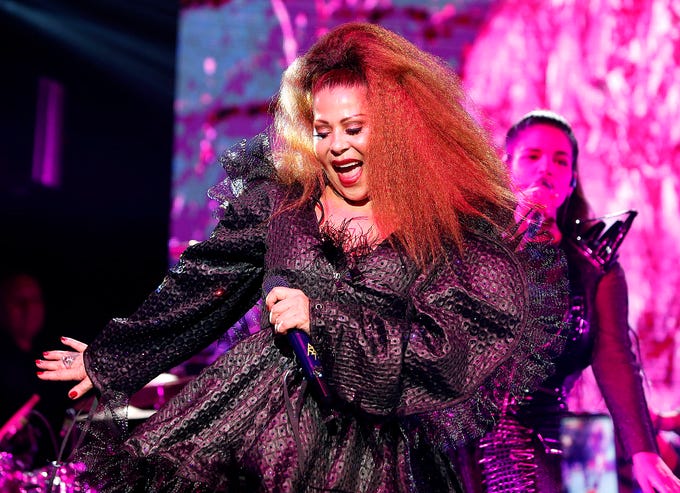 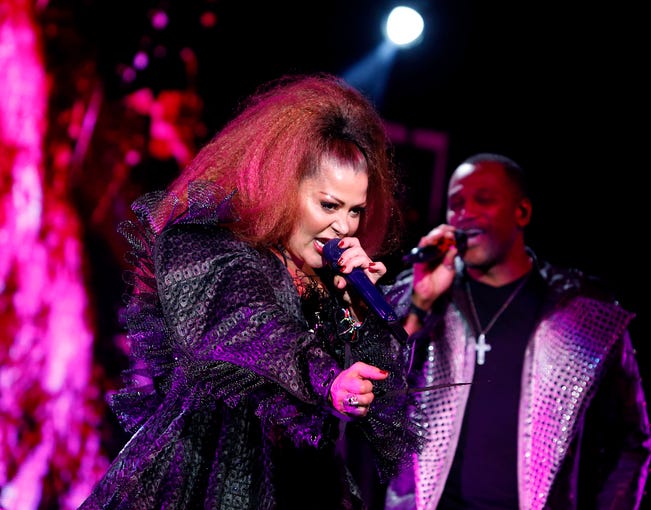 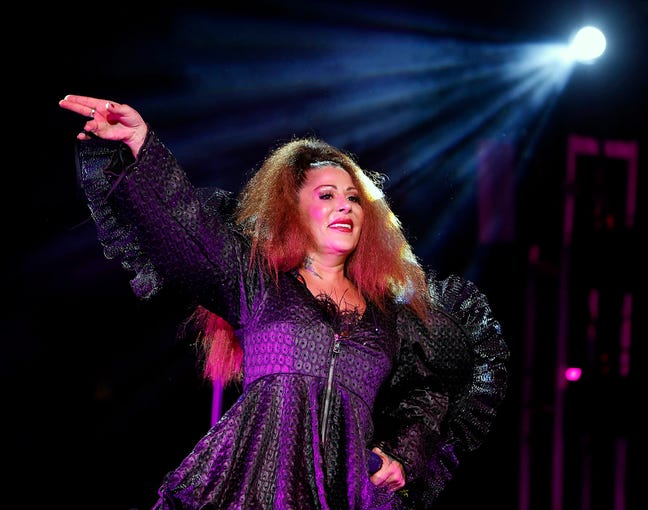 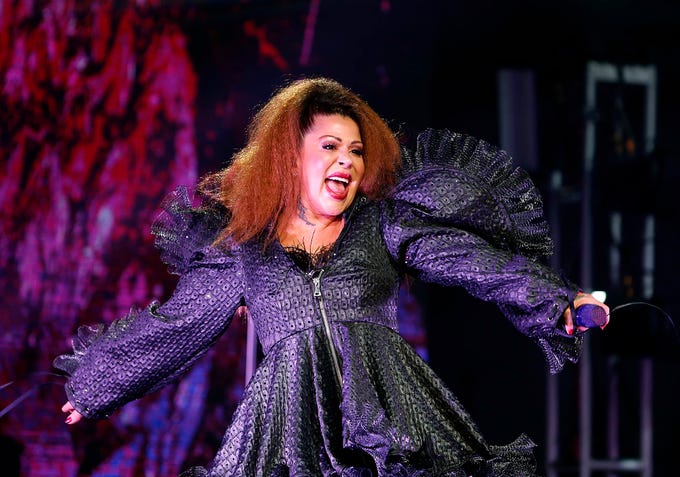 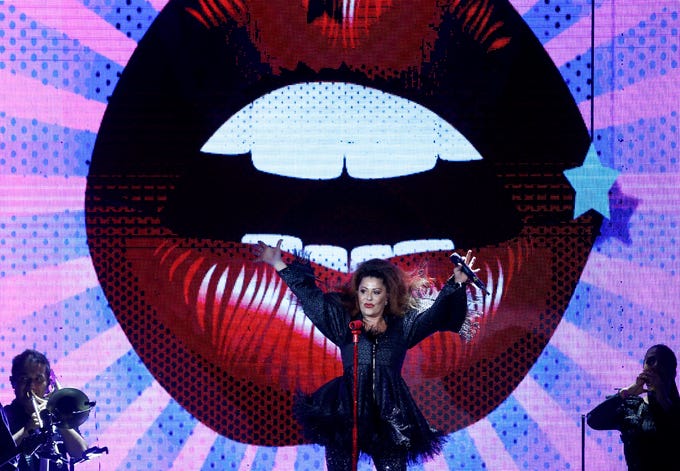 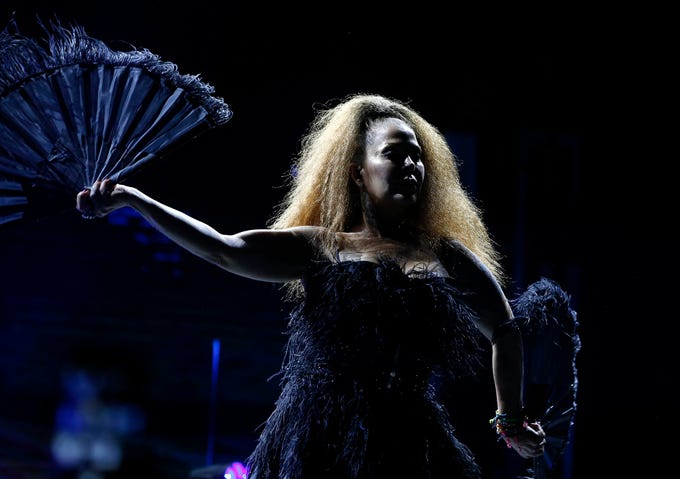 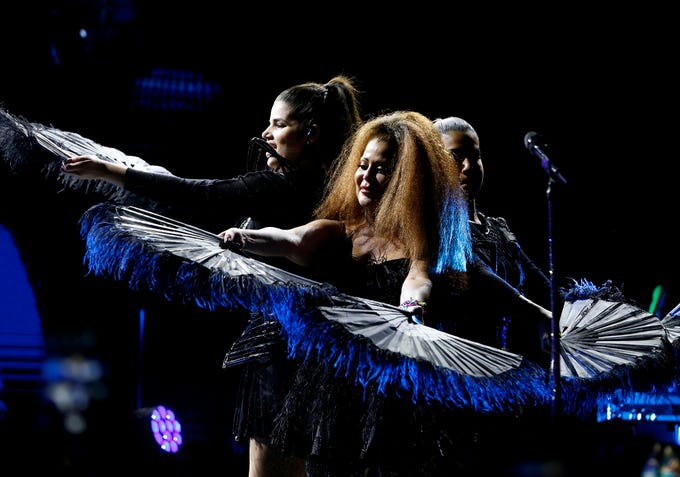 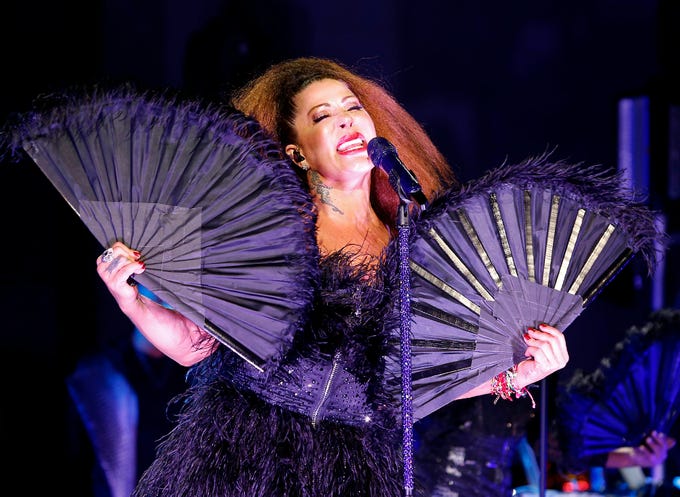 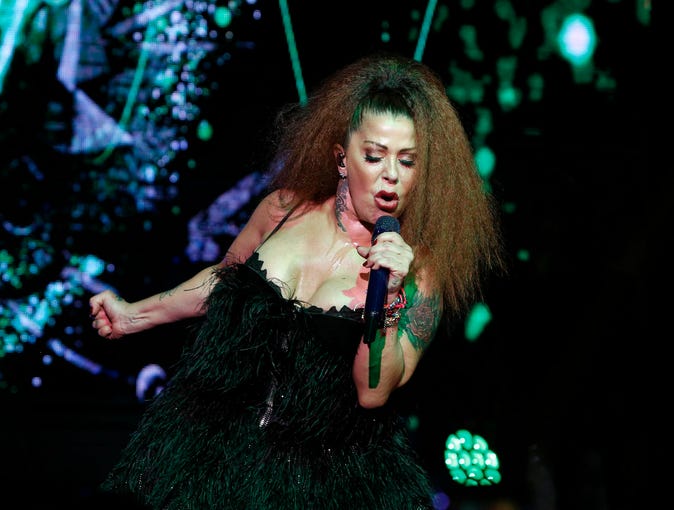 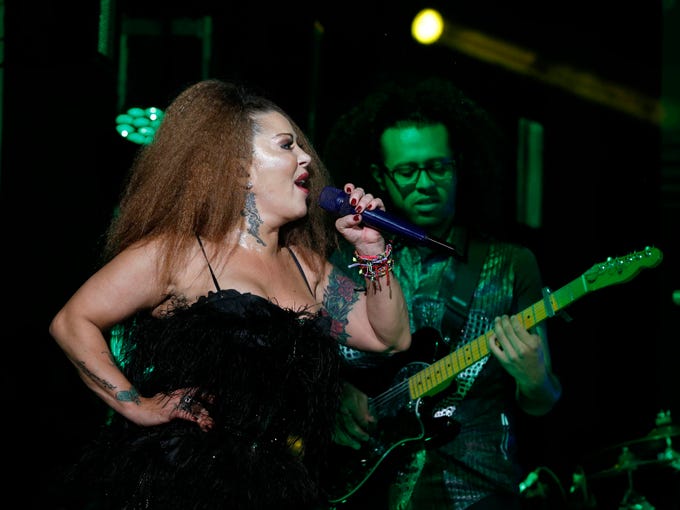 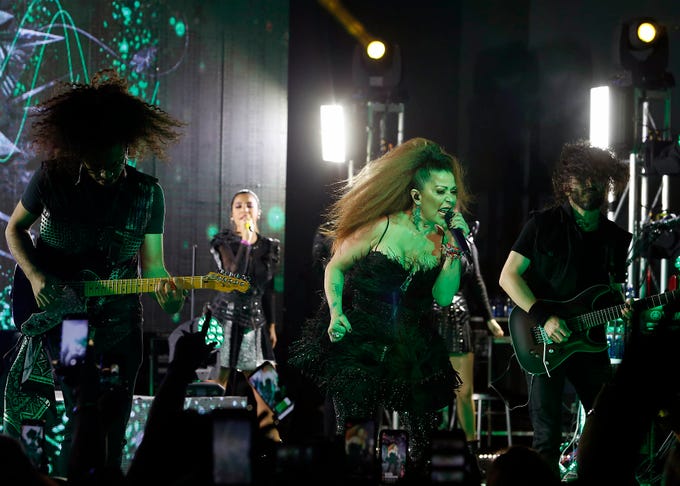 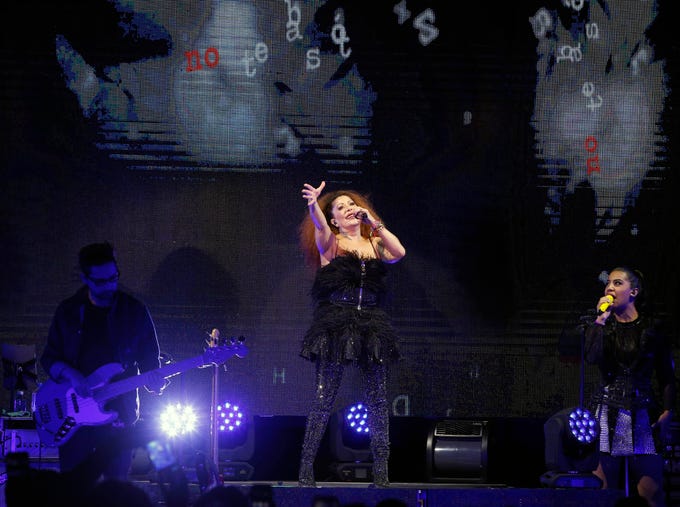 Mexican singer Alejandra Guzmán has led a life full of TMZ-style color and drama; after all, it's not every pop star who winds up with a full-blown telenovela biopic detailing their adventures on and off stage.

No gossipy headlines can take away one indisputable fact. The pioneering rockera is a great entertainer, and Saturday's concert at Wild Horse Pass Hotel and Casino only reaffirmed that fact.

At age 51, her unpredictable personality — she flashed the crowd her bare breast during a 2003 show at the Comerica Theatre — is as untamed as ever. She's engaging and loopy, with a show that was heavy on crazy wigs (was this an Amanda Miguel tribute?) and outrageous costumes. At one moment, she looked like a punk bride in layers of white crinoline and shiny black leather. Then, she donned a red leather bustier and sported a long braid that she twirled, as if she were a Princess Leia cosplayer.

MORE THINGS TO DO: For restaurant reviews, travel tips, concert picks and more, subscribe to azcentral.com.

Despite all the trappings, Guzmán remains a terrific singer, with a deep, dark rasp that can be explosively happy or mournfully sad. No one else sounds like her, though many try. She remains defiantly original, which is one reason why her concerts are such memorable affairs. Here are five of the greatest moments from Saturday.

This bouncy little cumbia (a collaboration with Pipo Rodriguez on disc) is atypical fare for La Guzmán, moving her deep into tropical territory. In concert it becomes a chance for some playful audience participation, as she brought a lucky man onstage to dance with her. Was he starstruck? Apparently not, judging by how confidently he executed some R-rated moves, sliding his hands around the singer's body. She happily played along,  finishing the song with a breathless, one-word exclamation: "Wow!" 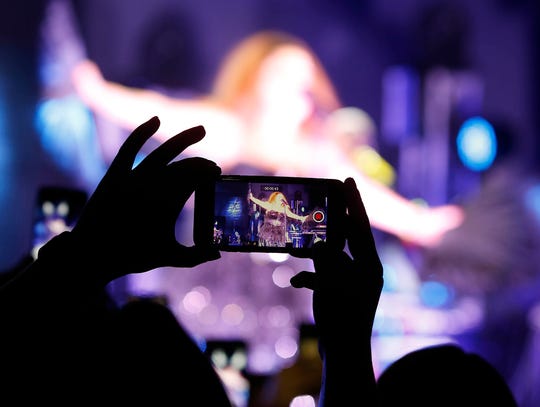 A fan records video on their cell phone as Alejandra Guzmán performs at Wild Horse Pass Hotel and Casino in Chandler on Saturday, June 1, 2019. (Foto: Ralph Freso/Special for The Republic)

This 1990 song is one of Guzmán's classics, with a twirling instrumental hook and a vocal full of attitude. Over the years, it has gone through several incarnations in concert, including one frantic version that bordered on ska. These weren't always successful, but they sure were adventurous.

This time around, the song started a cappella, as she and two backing singers snapped their fingers. They dragged out three chairs, which they teasingly danced around, as if they were in a production of "Chicago." Finally, Guzmán started singing a slowed-down, jazzy version of the song, and you think, "OK, this is how she's doing it now." Then she had the audience handle the first chorus, and you started to settle in. But before you could get too comfortable, a three-man horn suddenly appeared, the familiar instrumental hook was heard and Guzmán sang it straight, with the original arrangement. And then, pandemonium.

A 1991 power ballad — in the best sense of the phrase — this is a guaranteed sing-along at every Guzmán concert. And darned if she still isn't able to dig deep and make the song emotionally connect every time. 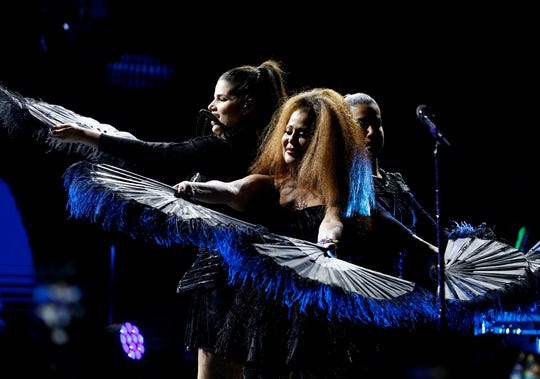 A bit of seduction from 1996 ("Touch yourself very slowly" she croons), this became a choreographed number, as Guzmán and her vocalists waved large black fans. Because it's so hot, we're guessing.

Guzmán closed with a wild, energetic "La Plaga," a Spanish-language version of "Good Golly Miss Molly." If that sounds like it's from left field, it's not. The song was made famous in Latin America in 1959 by Los Teen Tops, a band that included her father, Enrique Guzmán. She recorded it in 1988, and it became her first major hit. Even if it's not one of her best moments on record, she obviously has a sentimental connection to the tune, and her enthusiasm for it is hard to resist. 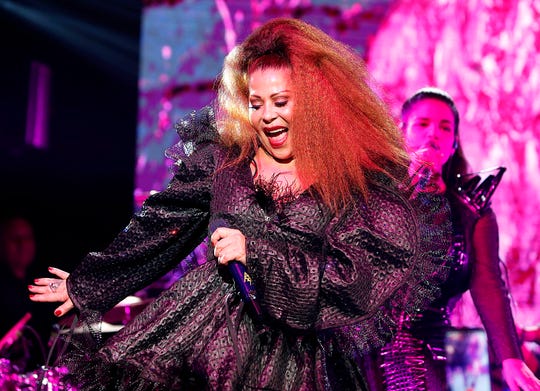