The comedy is broad and wildly silly, but also sweetly sentimental.

Eugenio Derbez stars in the comedy.

Goofy? Sure, but it's also funny and filled with heart, thanks to Eugenio Derbez. 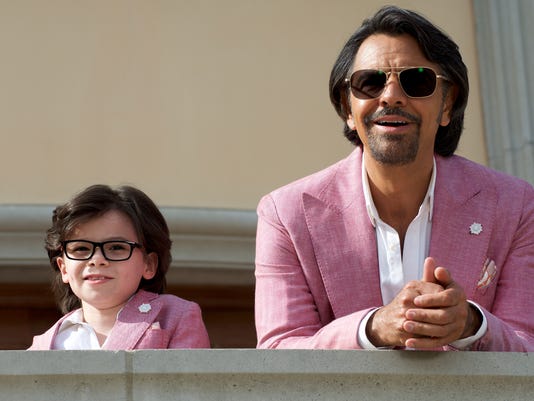 Maximo (Eugenio Derbez) takes his nephew (Raphael Alejandro) under his wing in "How to Be a Latin Lover."(Foto: Claudette Barius/Pantelion Films)

“How to Be a Latin Lover” is a lot like the title character: Soft and flabby around the middle, but not without its own whimsical charms.

The latter part of the equation is due to star and producer Eugenio Derbez, who designed the vehicle as a showcase for his comedic gifts. He is a huge celebrity in Mexico and has a considerable following north of the border. His last headlining film, 2013’s “Instructions Not Included,” became the highest-grossing Spanish-language movie ever released in the States. This time, starring in an English-language farce, he hopes to attract an even broader audience.

Things To Do app: Get the best in events, dining and travel right on your device

He plays Maximo, the Latin lover of the title. As a child, he discusses his life goals with his sister, Sara. She wants to be an architect and design a big house for the family. Maximo, on the other hand, draws inspiration from a magazine ad that features a wealthy businessman with a sexy blonde draped on his arm. “I want her job!” he declares, and thus his dream is set in motion.

Maximo (Eugenio Derbez) reunites with his estranged sister (Salma Hayek) in "How to Be a Latin Lover." (Foto: Claudette Barius/Pantelion Films)

He achieves his goal in his 20s, when he seduces Peggy, a voluptuous woman on the backside of 50 who owns a chain of supermarkets. The two marry, and it should be happily-ever-after time. But flash forward 25 years. Maximo checks every morning to ensure that Peggy is still breathing. He then makes a leisurely tour of their Beverly Hills mansion on his Hoverboard — he’s got one for every day of the month —  and relaxes in a bubble bath with his iPad, as a servant swipes left or right for him.

Does Maximo love Peggy? Probably, in his own way, but he loves her bank balance even more. He goes to buy a sportscar, and the salesman asks what form of payment he’ll be using. He nods at his wife. “Her,” he responds.

Things come crashing down when Maximo returns home and finds that the car salesman (Michael Cera) has replaced him in Peggy's bed. Maximo never signed a prenuptial agreement, so he winds up penniless. In a great visual gag, he's like a hobo, except with a designer suitcase and a Hoverboard. His best pal and fellow gigolo, Rick (Rob Lowe, perfectly cast), puts him up for a night in a Beverly Hills playhouse — literally, it's like an oversize dollhouse — before he is on his own again.

Maximo (Eugenio Derbez) and his wife, Peggy (Renée Taylor) go car shopping in "How to Be a Latin Lover." (Foto: Claudette Barius/Pantelion Films)

He goes to the apartment of Sara (Salma Hayek), from whom he has been estranged for several years. We know this because A) he thinks Sara has a daughter, not a son, and B) he doesn't know Sara's husband has died. Maximo and his adorably nerdy 10-year-old nephew, Hugo (nicely played by Raphael Alejandro), quickly bond.

Maximo moves in and tries to get back on his feet, which isn't as easy as it should be. Doing nothing but enjoying the sweet life for 25 years has left  him wildly out of touch with reality. When Sara makes chicken and rice for dinner; Maximo orders a lobster roll, as if he's at a restaurant. He's pouty, self-centered, spoiled and yet somehow oddly endearing; it's like Derbez channels the essence of Paris Hilton in her "Simple Life" days and somehow makes those qualities likable.

RELATED: 10 movies from Pantelion Films you need to see

Hugo has a crush on a girl at the private school he attends, and Maximo decides to teach him the ways of the Latin lover. It doesn't hurt that the girl's grandmother is a single billionaire (Raquel Welch), which gives our professional Lothario a new goal: Win the grandmother and help the youngster land the girl.

Fellow gigolo Rick (Rob Lowe) enjoys a day at the club with Millicent (Linda Lavin) in "How to Be a Latin Lover." (Foto: Claudette Barius/Pantelion Films)

The plot of the film isn't particularly complex, but it feels heavier than it needs to be. The screenplay is overstuffed with supporting characters and situations that don't really go anywhere. Kristen Bell turns up as a yogurt-shop manager who hires Maximo while Rob Huebel and Rob Riggle are dimwits tracking him down to regain some money he owes them. Do the actors score a a few laughs? Sure. Do they add anything to the movie? Not really, other than padding the running time, which begins to feel a trifle long as it nears the two-hour mark.

Still, there are quite a few genuine laughs along the way. Director Ken Marino has a firm hand with big, silly slapstick, but he also knows how to make the most of dialogue. In particular, Derbez's scenes with Hayek all have a wonderfully snappy give-and-take. The movie is even outrageous at times; a visual gag involving Welch comes out of left field and is both hilarious and astonishing (and, surprisingly, not salacious).

Derbez has shown a soft spot for sentimental comedies with heart, and "How to Be a Latin Lover" has plenty of that, too. There is a sweetness that keeps the movie (and Maximo) from feeling mean-spirited. Admittedly, it's an odd mix: You get a genial family comedy layered into the story of a gigolo preying on older women. Still, Derbez, as this ridiculously vain manchild, manages to tie it all together and be both effortlessly funny and charming. Now, that's star quality.